TCTE played taps on Memorial Day in Richfield, MN.
Timothy Blotz Fox 9: A Memorial Day salute from the Twin Cities Trumpet Ensemble for our fallen service members. At exactly 3pm today in coordination with Taps Across America, they performed a Jari Villanueva arrangement of taps from the roof of the Gramercy Cooperative. Many thanks to TCTE director James Olcott for inviting us to be present and share this wonderful tribute.
Here is a video link to the piece. 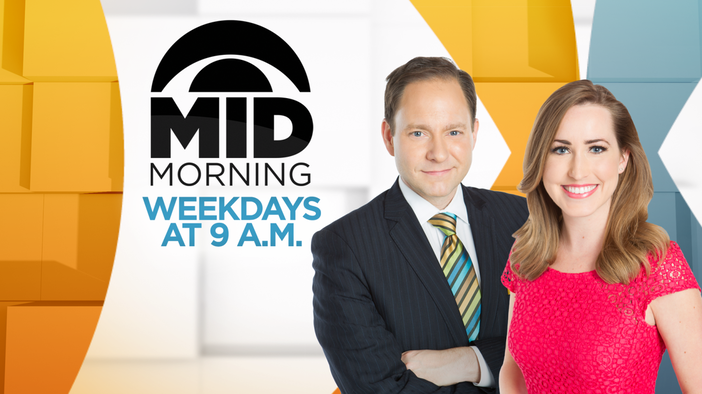 WCCO Channel 4 invited the TCTE, Director James Olcott, and guest star Marissa Benedict to appear on their Mid Morning program. Marissa and five members of the ensemble played selections from the "Hooray for Hollywood" concert to be held on November 17, 2019. Watch the video by clicking on  the graphic.

The TCTE, Director James Olcott, and guest soloist Marissa Benedict take the stage on the Fox9 News morning show to promote the "Hooray for Hollywood" concert on November 17, 2019. Watch the video by clicking on  the graphic.

TCTE CONCERT DESCRIBED AS "ONE COOL THING" (TO DO THIS WEEKEND) ON DAVE LEE'S MORNING DRIVE-TIME SHOW ON WCCO RADIO.

Six members of the TCTE got up early to promote an upcoming concert by playing "Wedding Fanfare" by James Olcott, the ensemble's director. (Video courtesy KARE-11 News)

Steve Staruch of Classical Minnesota Public Radio interviews Jim Olcott, founder and director of the new Twin Cities Trumpet Ensemble. They talk about Jim's background, the ensemble's origin, and the TCTE's inaugural concert to be performed on June 18, 2015 at Normandale Community College. Included are several pieces that were to be performed at the concert.

TCTE IN THE STAR TRIB!

Jerry Swanberg, host of "The Big Band Scene" on KBEM-FM Jazz 88, and a tireless champion of jazz in the Twin Cities, shared the following in his email to followers of his program:
I just heard the mighty TWIN CITIES TRUMPET ENSEMBLE, directed by James Olcott, at their Inaugural Concert at Normandale College on June 18, and they were Awesome! The band, consisting of 25 trumpets plus a Bass Trumpet, 2 Euphoniums,Tuba & a rhythm section, performed Marches, Classical, & Latin Music AND Big Band Jazz. The Jazz Classics of Woody Herman, Count Basie, & Antonio Carlos Jobim, featured 8 trumpets playing all the sections of the big band (trumpets, trombones, & saxes), and they really swung, plus the jazz solos were terrific.

It was a beautiful summer evening at Como Park. The sun was shining,the birds were singing, and the people were eagerly awaiting the upcoming concert. At 7:00 on August 30th , the Wild Prairie Brass opened for the Twin Cities Trumpet Ensemble. The Wild Prairie Brass consisted of three trumpets, two French horns, three trombones, one baritone, and one tuba. They performed a variety of pieces over thirty minutes, ranging from hymns, Debussy, and ended with “Ain't Misbehavin.” The closing piece was quite popular; many elderly couples started dancing.  James Olcott, a trumpet player, performed a stunning solo in Debussy's “The Girl with the Flaxen Hair.”

Finally, the Twin Cities Trumpet Ensemble, directed by James Olcott, took the stage and performed for forty minutes. We were greeted by a brilliant fanfare.  One thing the ensemble will never be accused of is weakness. The sheer power of twenty-four trumpets is enough to catch anyone off guard!  An audience favorite was Leroy Anderson's “Bugler's Holiday.” “Bugler's Holiday” would normally be performed with three trumpets. The trumpet ensemble performed it with twelve trumpet parts. The rendition was incredible, and the tonguing was amazing. After playing a piece that requires so much power, the ensemble demonstrated outstanding control by playing, “Even When He is Silent” by Kim Andre Arnesen. The words to this poem were found in a Holocaust prison cell and were put to music: “I believe in the sun even when it’s not shining. I believe in love even when I feel it not, I believe in God even when He is silent.” The ensemble beautifully expressed hope in the darkest times in this piece. This group inspired me by showing me how it is possible to play technically and lyrically. In addition, the ensemble performed “America the Beautiful”, by Carmen Dragon, transcribed by James Olcott. The instrumentation was interesting; consisting of B-flat trumpets, C trumpets, E-flat trumpets, piccolo trumpets, and flugelhorns. The contrast between the piccolo trumpets and the flugelhorns provided a wonderful richness to sound. The other works performed were as follows:  “Soundings” by Brian Balmages, Canzona noni toni a 12, by Giovanni Gabrieli, transcribed by David Brown, “God Bless America” by Irving Berlin, transcribed by James Olcott. The groups finished with a combined performance of “Overture to the Royal Fireworks” by Handel, transcribed by James Olcott. The rousing applause brought an encore, and the last forty measures of “Bugler's Holiday” were performed again. Although the ensemble has only been together for eight months, they play as if they have been together for a decade.  Overall, the Twin Cities Trumpet Ensemble is a skilled group with both technical and lyrical skills. I would highly recommend attending a concert.
Thank you so much, Jackie!
©2019 Twin Cities Trumpet Ensemble
Proudly powered by Weebly