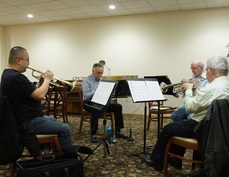 There is only one regularly-performing 24-trumpet musical ensemble in the United States, and it has its home in the Twin Cities! The Twin Cities Trumpet Ensemble (TCTE) was founded in 2014 by a trio of trumpeters who decided to invite others to join them for trumpet playing and camaraderie. It took only a few months for the group to grow to 24 of the best trumpet players in the area.

TCTE had 53 trumpeters play with the organization in 2020 and 2021. Since it's inception in 2013 they have had 77 players in their ranks and have played just under 100 performances. The ensemble has performed 251 works encompassing music from the Renaissance to the present. In 2021 TCTE released it's first CD album, "Soundings".

Under the direction of James Olcott and with an impressive repertoire, the TCTE has given numerous successful performances and is in demand for appearances around the region. For variety, the ensemble also boasts a jazz group of six trumpets and jazz rhythm section, and is augmented by percussion/timpani, and occasional low brass.

Fans of the TCTE have come to expect the obligatory opening fanfare at concerts, but then are astonished at the range and virtuosity of both the musical selections and the players. A Twin Cities Trumpet Ensemble concert is a musical feast not to be missed!

With its unique instrumental configuration and wide-ranging repertoire, The TCTE has the ability to create aural representations and evoke emotions that:
1) attract attention (Soundings, Heroic Fanfare)
2) excite (Procession of the Nobles, Light Calvary Overture)
3) create fun/enjoyment (Colonel Bogey, Bugler’s Holiday)
4) celebrate (Stars and Stripes Forever, Hava Nagila)
5) inspire (It Is Well With My Soul, Hallelujah Chorus, Shenandoah)
6) enrich, which is why we do what we do.

Educational Outreach is also a major part of the Twin Cities Trumpet Ensemble's mission. Elementary and middle school Arts Immersion days as well as college-level master classes and clinics have made up a part of the TCTE calendar since its inception. In addition to working on technical and interpretive skills, the Ensemble also promotes the life-long value of music education.

The Twin Cities Trumpet Ensemble is a 501(c)3 organization, recognized by the US Internal Revenue Service. All donations to the ensemble as tax-deductible. Visit our Donation Page to support the outreach of the TCTE.

​To enliven, entertain, and enrich our community through artistic excellence by presenting trumpet music of quality and stylistic and emotional diversity.

​Recognizing that the trumpet holds a special place in the psyche of society, the TCTE models the transformative power of music through the performance of repertoire written for three or more trumpets.

ABOUT THE DIRECTOR:
James Olcott was professor of trumpet for 35 years at Miami University (Ohio), where he led a dynamic trumpet studio with several top-notch ensembles. While at Miami he was an active player throughout the area and around the country in both jazz and classical genres, including holding the position of principal trumpet of the Cincinnati Ballet Orchestra for nearly 25 years. With an abiding interest in trumpet ensemble as a musical and pedagogical tool, he founded trumpet ensembles at Miami University, began the Cincinnati Herald Trumpet Ensemble in the early '80s, and has been a leading and ongoing proponent of the idiom throughout his adult life. It was partly for this reason that he was awarded the International Trumpet Guild's Award of Merit in 2005.

He has conducted jazz bands and brass groups throughout his 45-year teaching career, including professional, semi-pro, amateur, and student trumpet ensembles in Europe, Asia, and the United States.
​
As a composer and arranger of music for trumpet ensemble, his works are performed worldwide and are published by Crown Music Press of Chicago, Tromba Publications of Denver, and by his own publishing firm, Triplo Press, which he founded in 1991.
PERSONNEL:
The Twin Cities Trumpet Ensemble is proud to boast the following musicians on its roster:​
GENERAL PREMISE:
The principal ensemble, "The 24", rehearses twice a month, while the other performing ensemble, the TCTE Jazz Group meets once a month. Both groups work on the premise that the players understand the necessity of preparedness prior to rehearsals. This enables the groups to move quickly to musical, rather than rhythmical or technical issues during rehearsals.
A third ensemble, the 13-15-member TCTE Reading Group, meets once a month to read manuscripts received from composers, transcribers and arrangers from around the globe. The group works through an average of 13 compositions per session.
Members of the Twin Cities Trumpet Ensemble are all dedicated musicians who stretch in age from 26 to 79 and represent professional and non-professional players who are retirees, students, teachers, and representatives of many professions not directly related to music. Working together, the group has become an important mainstay in the cultural landscape of the Twin Cities.